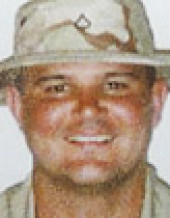 Ott and Sgt. 1st Class Gladimir Philippe, with the same unit, had been listed as missing in action after they failed to respond to a radio check June 25 south of Balad, Iraq. A search party was sent to the location of their last radio transmission, but was unable to find the soldiers. Their remains were located in Taji, Iraq, on June 28.
Pfc. Kevin Ott had worked with a youth group and sang in the church choir in his hometown of Orient, Ohio. He decided to join the military after the Sept. 11 attacks, and even when he was deployed to Iraq, his father says, he wasn’t afraid of dying.
“He was completely at peace,” said Charles Ott.
Ott’s body along with that of another soldier were discovered June 28 near Baghdad, three days after they were reported missing some 25 miles away. Ott was part of an artillery unit based at Fort Sill.
Pam Condo, 49, remembered the time her brother gave her a ride on his beloved motorcycle. “I was afraid because I knew he loved to go really fast, but to my surprise, he went really slow because he knew I was scared,” she said.
Ott played defensive end for a season at Bluffton College, was on the football and basketball teams in high school, and coached his nephew’s Little League team, Condo said.
His calls and letters during the war were reserved, but his family could tell he was proud. “He absolutely loved Army life,” Charles Ott said.