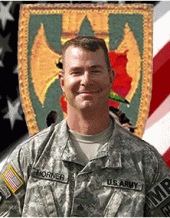 Soldier who lived in Va. killed in Iraq

By The Associated Press…

Horner, an 18-year career soldier, was among those involved in the search for three soldiers who went missing on May 12, his father Ed Horner told The Morning Journal of Lorain, Ohio.

The elder Horner and his wife Betty, along with Bruce Horner’s wife Erin, were notified of his death on Friday. Erin Horner lives in the couple’s apartment in Germany.

Bruce Horner started his career as an emergency medical technician in Lorain.

Soldier killed in Iraq remembered for generosity, love of music

Army Sgt. Bruce E. Horner’s family said he was known more for his musical talents than anything, appearing in a school play and singing in various school groups.

“He loved to sing. He loved to laugh, and he loved to get together to tell stories,” said Douglas Horner, his brother.

“That’s the type of person he was.”

Horner, 43, of Newport News, Va., was killed June 1 in Baghdad by a sniper. He was a 1982 high school graduate and was assigned to Fliegerhorst, Germany.

Horner’s two favorite places were the church and the gym. He and his wife, Erin, were fond of biking and running and attended church together.

“He had this almost glow about him,” said his mother-in-law, Sandra McDaniel. He “loved people, and he loved helping people.”

Once, he delivered Christmas presents to an immigrant couple and then launched into a chorus of “Feliz Navidad.” The couple had arrived from Korea and scarcely knew English, let alone Spanish.

But Horner’s intent was clear.

One Christmas, when Horner and his wife were low on cash, they gave friends certificates redeemable for baby-sitting hours.