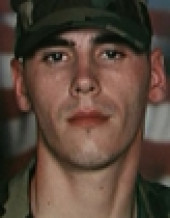 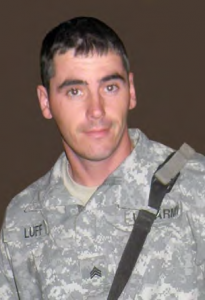 Army Sgt. David Luff was excited about his son’s birth in May and was glad he was home for the day he had been looking forward to since getting married a year and a half earlier. But he had just three weeks with his newborn before leaving for his second deployment to Iraq. He looked forward to returning home on leave in February and reuniting with his wife, Katie, and son, Aiden. He talked about his anticipation in text messages to his sister, Stacy Garrison, she told the Cincinnati Enquirer. “He was an awesome guy. … He loved his son and his wife very much,” Garrison said.

Luff, 29, of Hamilton, Ohio, died Nov. 21 in Tikrit when insurgents attacked his unit with small weapons. He was assigned to Schofield Barracks, Hawaii.
His second wedding anniversary would have been Dec. 31. He began dating Katie when they were students at Hamilton High School.
Luff, a 1999 graduate of Hamilton High, also was known for his sense of humor and good-natured attitude. He was a big fan of the Cincinnati Reds and Bengals, and semipro wrestling.
He also leaves behind his parents, Dave and Lucy Luff.