By Peter Zicari, The Plain Dealer… 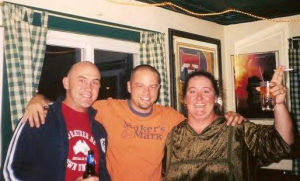 Army Sgt. Norman Lane Tollett had always admired what he considered the patriotism and courageousness of NFL player Pat Tillman, who left the league to join the military. After visiting the site of the World Trade Center after the 9/11 terrorist attacks, Tollett was deeply affected. It inspired him to join the Army in 2005, a year after Tillman was killed in Afghanistan.On Sunday, just days before Lane Tollett’s birthday, his father, David Tollett of Elyria, learned from military officers who visited his home that his son had been killed in Iraq. Lane Tollett, 30, of Elyria, was stationed at Fort Bragg, N.C., in the 82nd Airborne Division. He played football at Elyria Catholic High School. “Not too long after Lane found out about Pat Tillman, he knew he wanted to do it [join the Army],” said his brother, Don Tollett. “He had friends in New York and went to visit after 9/11. It was a moving experience for him . . . struck him pretty hard. He was upset and wanted to do something.”Lane did his research and joined the Army in 2005. Within a year, he did his first tour of duty in Iraq for six months, his brother said. He returned for a second tour of duty in early January.Lane Tollett was a born leader, his brother said, and excelled in boot camp the way he did on the gridiron, baseball diamond and wrestling arena when he was in high school, where he was co-captain of the football team.
For years, he worked in the family’s vending machine business. But at age 28, he felt should go to fight rather than the younger people heading to combat. “He wanted to be a part of something much bigger than he was,” Don Tollett said, “and would rather put himself in front of a young husband or father. He hated reading about people who went in right after high school.”
“Instead of celebrating his birthday, we are planning his funeral,” his brother said.