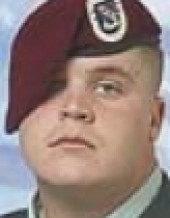 LOUDONVILLE, Ohio — If Loudonville High School biology teacher David Spreng were to write a book, one chapter would be devoted to Damon Winkleman.

On Monday the Loudonville community learned that Spc. Winkleman, 23, of Lakeville, was killed last week in Afghanistan. He was an Army combat medic.

“I had Damon in several classes, and he was just so good-natured,” Spreng said. “He never took himself too seriously. He had a great sense of humor and was always coming up with something that would have you in st

itches. He made teaching fun.”

Details of Winkleman’s death have yet to be released by the Department of Defense. Family members reached Monday night declined comment.

“I’m fortunate to still have the memories,” Spreng said. “But we’ll sure miss him. This is a school where you knew everybody, and I’m sure this has touched his whole class very deeply. I always said if I ever were to write a book about my teaching experiences, at least one chapter would be on Damon.”

Winkleman was a member of the 82nd Airborne. Funeral arrangements are being handled by Byerly-Lindsey Funeral Home in Loudonville.

“He was so well-liked by the students and teachers alike,” Blubaugh said. “He was a very solid young man with wonderful values. He impressed me. He had goals and knew where he was going. Any parent would be proud to claim him.”

Blubaugh said district officials were informed of the news Monday.

“We’re waiting for more information to see what happens, but I’m sure the school will be a part of it when we find out the arrangements,” he said.

“Damon was just such a nice kid,” Warbel said. “You just remember the whole Winkleman family as just the nicest family. If we had a carnival, you could count on them being there helping. They were the kind of family you like to see at your school. So many come and go, but you remember people like that. This is just a tragedy.”

Danville resident Sam Kapport, a 2005 Loudonville graduate, said he played with Winkleman in a garage band called The Red Republicans.

“We were a high school band and everyone in it was completely different from each other,” Kapport said. “We were not from the same social groups, and a lot of people didn’t understand that, but we did it anyway, and we loved it.

“Damon was one of the most talented bass players ever. His father taught him how to play bass and taught his brother Nate geometry. Damon used to say, ‘I wish I had learned geometry,’ and I’d say, ‘No, Damon. You needed to learn bass.’ He was awesome.”