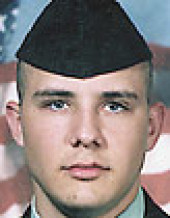 21, of Wilmington, Ohio; assigned to 2nd Battalion, 5th Field Artillery Regiment, based in Fort Sill, Okla.; killed Nov. 2 in an attack on a CH-47 Chinook helicopter near Fallujah, Iraq.

Sgt. Steven D. Conover shared stories with the family about the dangers in Iraq, including one in which a Humvee blew up in front of him and killed a man Conover had trained with. “He was the sergeant, so he had to prepare the man for sending him home to his wife and children. That affected him greatly,” said his stepfather, Michael Earley. Conover, 21, was among 16 soldiers killed in the Nov. 2 downing of an Army helicopter carrying soldiers home on leave. He was stationed at Fort Sill.

“They were ambushed quite often, and he just said he knew the hand of God was on him,” Earley said. “Now, he was on his way home, but he got to go all the way home. My boy was a Christian, and I know he’s in heaven right now.”