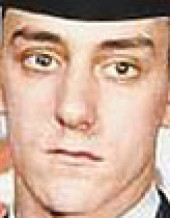 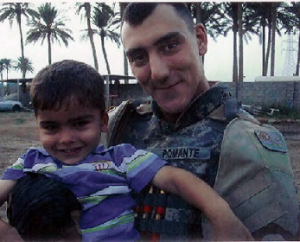 Army Spc Vincent J. “VJ” Pomante III was a tall lanky laid back 22 year old from Westerville, Ohio who pulled the unenviable duty of receiving and shepherding visitors to the 1st Brigade of the 1st Armored Division, or “Ready First.” If waiting five days for a seat on an aircraft is tedious, imagine how tedious it is for the guy who’s on the other end of that flight, waiting for you to arrive.
But if all that waiting ever bothered Pomante, he never let it show. I had flown in and out of the brigade’s area of operations at least half a dozen times, and each time I would be met by a smiling Pomante offering a handshake and a cigarette. It didn’t matter if I landed in the middle of the day, or in the chilly hours before dawn.
Pomante had a warm, talkative manner that was well suited to passing time — and we had plenty of time to pass. He was a big outdoorsman and talked a lot about camping, outdoor gear, fishing and sailing. He was one of those rare soldiers you could talk with and forget you were still in Iraq.
Pomante died in a roadside bombing on Dec. 6, 2006, about a month before he was to return home. Ever since, I have tried to remember exactly what he told me about his post-Army plans. I remember he was excited about what lay ahead, but I can’t recall any specifics. I think there was talk of going to school, traveling abroad and maybe hiking the Appalachian Trail.
What I do recall though is the sense of envy and excitement I felt listening to this friendly young man. His time in the Army was nearly up, and he could barely decide on what adventure he would pursue next. The options seemed endless.
monte.morin@latimes.com