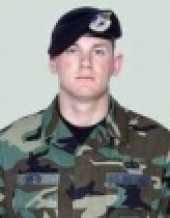 Griffin was on patrol in central Baghdad on Thursday when his vehicle encountered a roadside bomb and he was killed, officials at Kirtland Air Force Base confirmed late Friday.

Griffin, who had served in the Air Force for nearly nine years, was a member of the 377th Security Forces Squadron at Kirtland. He had been stationed at the Albuquerque base since July 2004.

Griffin’s mother, Christine Herwick of western Ohio, was at the Clearcreek Christian Assembly in Springboro, Ohio, on Thursday when she learned of her son’s death. Griffin’s picture is on a prayer wall at the church.

“He died doing what he loved,” she said.

Herwick and Griffin’s stepfather, Donald Herwick III, said he was born in Okinawa, where the Herwicks were both on active duty, and traveled with them from base to base.

“We knew there was risk every day,” Donald Herwick said. “He wanted to be there.” 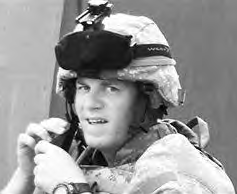 Col. Robert Suminsby, installation commander at Kirtland, said Griffin’s mission in Iraq was much more dangerous than what most airmen are confronted with.

“Most deploy for four to six months. He actually volunteered to go on a 365-day tour,” Suminsby said. “He was one of the folks that really stepped up to do not just a very dangerous and demanding mission, but one that was going to last a lot longer.”

Griffin, of Dover, Del., had been in Iraq since October and was working with the 732nd Expeditionary Security Forces Squadron. As part of the squadron’s Detachment 3, Griffin and his fellow airmen were focused on helping build Iraq’s police force.

Capt. Kevin Eberhart, operations officer of Kirtland’s security forces, had regular talks with Griffin before he deployed last fall. The two talked about Griffin being safe and taking care of his troops as well as the importance of the mission.

“The biggest thing that comes to mind when I think about him is he was definitely the right person if you had to pick one individual from our unit to go over and do this training. He was that one,” Eberhart said.

In a November interview with the American military newspaper Stars and Stripes, Griffin said: “I want to leave knowing that we’ve done something.”

Eberhart described Griffin as competent and confident but not arrogant.

“He had a capability and a charisma about him,” he said.

Kirtland Air Force Base spokeswoman Jillian Speake said a memorial service was being planned for Griffin but no date has been set.